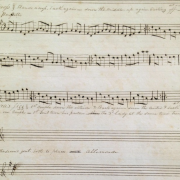 In 1789 Thomas Jefferson sent a letter from Paris to the framers of the US Constitution exhorting them to include what would eventually become our Bill Of Rights. In that same letter he praised a group of newly composed songs by the American Francis Hopkinson that he and his musical daughter enjoyed playing. These songs are included in the latest musical/historical offering my Christopher Layer and his New Harmony Music Festival on April 18 at the Murphy Auditorium in New Harmony, IN. The now 4-year-old music festival and summer music school takes place the 2nd week of July each year, but Layer and his talented bunch of young traditional and classical musicians are excited to present both the music of Jefferson’s extensive music library but also the music of the slaves to labored on the historic Virginia plantation.

The concert has been produced at the 92nd Street Y in NYC, The Caramoor International Music Festival, and now here as a part of the New Harmony Music Festival’s 2015 offerings.

“To witness audience reactions to the second half of “Monticello” is just amazing as folks recognize the similarities, the differences and ultimately, the intense relationship between through-composed chamber music of the 18th century and the traditional Blues and American music around us today. The Glass Armonica in the first half is also a real highlight: Its surreal sound and delicate nature transports the audience to a very special musical place.”

At the height of this dynamic “concert experience” the audience will witness a sort of “battle of the bands” as classical chamber musicians on one side of the stage trade renditions of songs heard on the Jefferson Plantation with a traditional fiddle, banjo, string bass and voice performing traditional versions of the same songs and tunes from the slave’s point of view.

“At the dawn of the 19th century, the music of Hadyn, Correlli, Mozart, Robert Burns, and the African roots & early music of the Slaves all played a significant role at Monticello. Fiddle & dance music blended with classical composers’ works in an evenings’ entertainment. Concertgoers will hear music from Jefferson’s library, and traditional music and blues from after the time of slavery. Bluesman Jerron “Blindboy” Paxton, traditional fiddler and singer Mazz Swift, an all-star baroque ensemble, and William Zeitler, master of the marvelous “Glass Armonica” all lead us on a musical journey into the marble halls and slave quarters of Thomas Jefferson’s own Utopian world.” Said Layer.

A Midwinter Night’s Dream – Listen to the Concert

A Return to the Rivers
Scroll to top