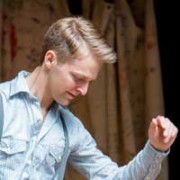 Michigan-born dancer Nic Gareiss has been described by the Irish Times as “the human epitome of the unbearable lightness of being,” and “the most inventive and expressive step dancer on the scene” by the Boston Herald. His choreographic work re-imagines movement as a musical activity, recasting dance as medium that appeals to both eyes and ears. Gareiss draws from many percussive dance traditions, weaving together a dance technique facilitating his love of improvisation, traditional dance footwork vocabulary, and musical collaboration. He has concertized internationally for over ten years with many of the luminaries of traditional music, including Frankie Gavin, Dervish, Bill Frisell, Darol Anger, Bruce Molsky, Phil Wiggins, Buille, Solas, Liz Carroll, Martin Hayes, The Gloaming and The Chieftains. Nic holds a degree in Anthropology from Central Michigan University and a MA in Ethnochoreology from the University of Limerick.