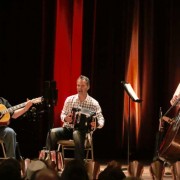 Imagine a musical journey that spans centuries and crosses the Atlantic from France to Quebec, then follows the St. Lawrence and Great Lakes to the Wabash valley, and down the Mississippi to Louisiana. Now imagine that you took a musical snapshot at points along your journey, and that’s what we heard when the New Harmony Music Festival and School presented “From the French Court to the Cajun Kitchen. Christopher Layer, ToniMarie Marchioni, and Matthew O’Neill shared the stage with Michael Lewis and Denise Wilson of Traveler’s Dream and Paul Gregoire’s Cajun accordion accompanied by Wade Bernard, and Roger Barhart. 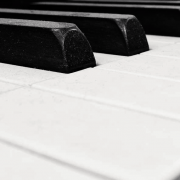 Grand pianos are invading Utopia. Or at least they will be if New Harmony Music Festival & School founder and director Christopher Layer has his way. This coming March 25th & 26th the Festival will be hosting Friday Night benefit concert-reception a piano masterclass and a Saturday Night Concert in the town of New Harmony, IN, once the seat of early American “Utopianism”. All this with the endorsement of some very big names in the world of classical music: pianist Menahem Pressler, whose students will be performing throughout the weekend, and the Leonard Bernstein Family Foundation “I know in my heart of hearts that “Lenny” would love what we are doing in New Harmony, and the fact that Mr. Pressler was so enthusiastic to support our idea and send his prestigious piano students to us to make music is just a dream come true. As a smaller music festival now in it’s fifth year, we could ask for no greater acknowledgement of our rising status in the festival world.

Friday Night Benefit Concert and Reception We were given two historical Steinway concert grand pianos that were played in New Harmony a hundred years ago or more. Both instruments are gems, but in need of significant restoration to make them great instruments once again. Once restored, the instrument (or instruments is possible) will live on the stage of The Historic Thrall’s Opera house in perpetuity, the festival will own and maintain the instruments for artists who appear at the venue.

Saturday Open Masterclass with Ilya Friedberg Prize-winning concert pianist Ilya Friedberg, who began his career in St. Petersburg, Russia, is the senior teaching fellow and assistant to 92-year-old piano legend Menahem Pressler at the Jacobs School Of Music, Indiana University. Friedberg, will conduct an open “masterclass” where students from the area as well as the Pressler Studio pianists will perform then be critiqued by Friedberg.

“It’s a fascinating spectacle to watch professionals and students interact onstage in this unique teaching situation. (Masterclasses are common in music, theater, and ballet as a means of simulating the stresses and excitement of actual live performances.)

Creating a new event for the music festival

The Menahem Pressler Piano Weekend is the brainchild of Mr. Friedberg and Mr. Layer (who spends his time between Broadway shows, Orchestral solo work, touring with rock bands, and raising funds for his beloved Indiana festival). Layer and Friedberg imagined a weekend of concerts, masterclasses (and eventually a composition competition) to show off talented young musicians and create new artworks for the piano repertoire. “We had just completed a Spring concert in New Harmony, and I took Ilya, whose sensitive and fiery piano playing had charmed me from the first, to the top of the Richard Meier Atheneum overlooking the town and the river and there, surrounded by the natural beauty of New Harmony, we began to discuss the possibility of bringing Mr. Pressler’s most gifted students to perform. The rest just fell into place over the next year. If it succeeds, we will move on to the next phase: to create a composition competition for emerging composers who can add to the piano rep.”

An International cast of musicians

Along with Mr. Friedberg, several of Pressler’s students will travel down from Bloomington, Indiana to perform and take part in the concerts and classes. They include: Phyllis Pan (China) Noah Sonderling (USA) Jenny Lee (Korea) and Andreas Ioannides (Greece). Visiting artist Greg Kostraba will also join us for Saturday’s concert, performing works by American composers Irving Fine, Edward McDowell, and Harry Bulow.

A living legend believes in the power of music and service 92-year-old Menahem Pressler is a familiar name to anyone interested in the world of chamber music. A founding member of the Beaux Arts Trio, he began teaching piano at The Jacobs School at I.U. In 1955; a position he still holds today, feeling that his performance and teaching careers are still far from completed. Pressler, who has always espoused as much passion for teaching as performing had this to say about music: “It is love that drives me. I love this music. I love all music. And I feel that serving music makes your life worthwhile. It makes life worth living…” No doubt the music his cast of students bring to New Harmony will make us all feel as if life is worth living.

Helen Corbin-Heinl was a great concert pianist who lived in New Harmony, but toured the US giving concerts in the 1890s and beyond. The family wanted her ornate mahogany Steinway(circa 1894) to return to New Harmony and I promised (name) that I would make it happen about a year before she passed-on. The second piano, also a mahogany cased Steinway came from Historic New Harmony who wanted to help with the project. We hope we can raise enough money to restore one or both of the instruments in the next two years.” 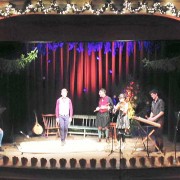 We are almost ready to announce our Spring concerts in March and April as well as our summer line-up of talented musicians…BUT we are kicking-off our fifth year with matinee and evening performances of our Christmas In Appalachia music and dance concert at The Historic Thralls Opera House on Saturday, December 5th, 2015 at 1pm & 7:30pm. The performances will take place during the “Christmas In New Harmony” weekend. Concertgoers, holiday shoppers, and visitors to New Harmony will be able to enjoy a host of town-wide activities and special events throughout the day and the weekend. http://visitnewharmony.com/

Let’s dance and sing to warm the soul in December!!!